History of The Village

The ancient settlement of Nursling, formerly Nutshalling (from ‘Hnutscillingingas’ which means ‘the family of the shelter by the nut tree’, or, ‘the nut grove by the water meadows’) now with a post-war shopping centre, housing estates, hall and school, is divided by the M27 motorway from the Victorian village of Rownhams, also extended by substantial post-war development.

St Boniface Church is early 14th century but retains evidence of an earlier building. The village squire commissioned a church to be built in 1855 right in the middle of the village where certain rowdy elements had been causing a nuisance.

The first real sign of housing development in Nursling & Rownhams was Upton Crescent and the first phase of Triangle Gardens in 1936. No further development of any size took place until the late 1950s:

In 1964 some 800 acres of the parish were annexed to Southampton City – this area is now known at Lordswood and Lordshill. The construction of the M27 and M271 was completed in 1972.

Possibly the earliest reference to Nursling is as the Roman settlement called Onna guarding the crucial crossing point on the River Test – very close to where the M27 crosses the same river 2000 years later. The road along the south coast between Venta (now known as Winchester) and the New Forest passed very close to Nursling Mill. Since no trace remains of the bridge across the Test it is assumed that it must have been a wooden one. The main activity in the dark Ages focussed around a large monastery. This was described by the Venerable Bede in AD 686 as the earliest Benedictine foundation in Wessex. The exact location of the monastery is no longer known, but it was probably close to the existing St Boniface church. In 716AD the young monk Winfrid, trained under Abbot Wolfhard, set off from what was then called “Nhutcelle” monastry to Germany. He went on to great things and eventually was canonised as St Boniface. An accounts of his life may be found here. Unfortunately in AD 878 the Danes sailed up he River Test and completely destroyed the monastery. It was never re-built. In AD 908 the village is referred to by the Anglo-Saxon name of “Hnutscilling” – which translates as “shelter by nut [hazel?] trees”. The village is detailed in the Domesday Book in 1086AD as a community of 21 people belonging to the Bishop (of Winchester?). Later the village name evolved to “Nutshalling” and then, relatively recently to “Nursling”. The first accurate map of the area probably dates from surveys carried out about 150 years ago by the army surveyors and published in 1867.

The Digital Village News is now available at nrvn.org.uk

The next Parish Council meeting will be held on Tuesday 7th July at 7.30pm. As the Village Hall is closed, this will be a virtual meeting. The agenda for the meeting can be viewed here

We have a number of groups offering assistance during the lockdown. Click here to view more information

The Village Hall and Community Centre have been closed to protect the public from the Corona Virus. As a result, all events in these facilities have been cancelled until further notice.

The Skate Park and Childrens’ Playgrounds are all closed. 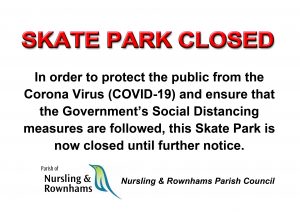 To view the video of the replacement of the A3057/M27 bridge, see the Highways England project page .   https://highwaysengland.co.uk/projects/m27-romsey-road-bridge-replacement-s

The charity Test Valley Community Services has been re-branded as Unity.  It provides mobility and transport support for older and disabled residents, and other services for local businesses.

Thanks to Hampshire County Council, Superfast Broadband has reached 95% of Hampshire, and that figure is on target to reach 97.4% by the end of 2019. Click here to check if you can have access.

The Latest Newsletter is available here